January 2–9: Week of Solidarity with the Anarchists and Antifascists Arrested in the “Tyumen Case” 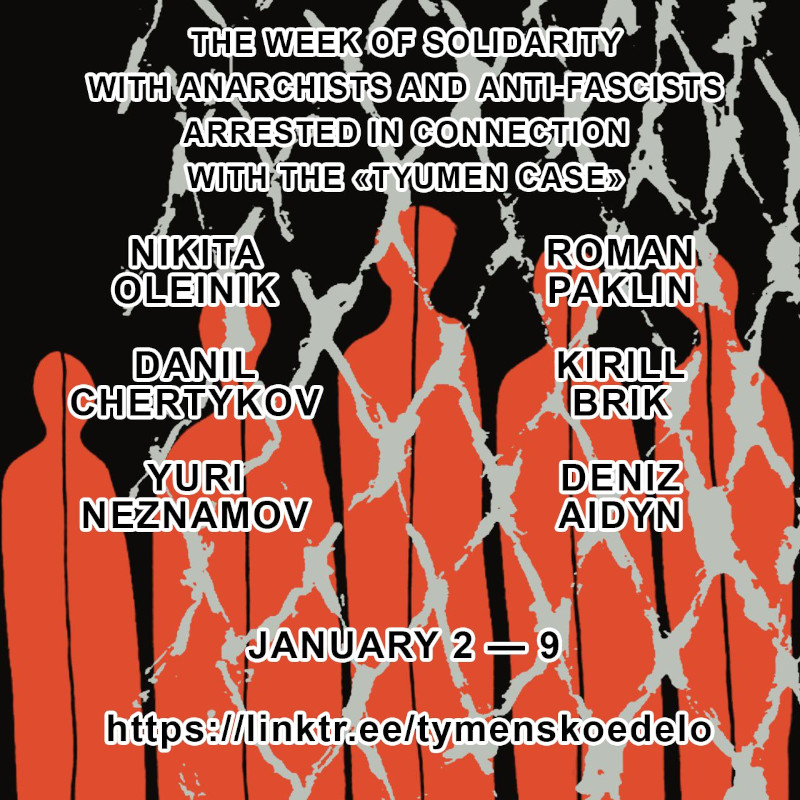 Against the backdrop of events inside Russia and the invasion of Ukraine, the Russian state has taken further steps to suppress the remaining anti-authoritarians in the country.

At the end of August 2022, six comrades were arrested in the cities of Tyumen, Yekaterinburg and Surgut: Kirill Brik, Deniz Aidyn, Yuri Neznamov, Daniil Chertykov, Nikita Oleynik and Roman Paklin. Within days of their arrest, all 6 persons were tortured: by water, beatings, and electric shocks. All six were placed in remand prison on charges of organizing or participating in a terrorist group. In the ruling to initiate criminal proceedings, the authorities state that the defendants were engaged in “destructive activities,” felt “hatred for the political system” and were “preparing to overthrow the government.” The comrades face from 5 to 20 years in prison.

The Russian state tried a similar scheme in the “Network case” against anarchists and anti-fascists from Penza and St. Petersburg in 2017, using torture to extort the necessary testimony. This has become a normalized tool for use in law enforcement in Russia. Meanwhile, a wide range of people in the country as a whole face beatings and torture by police and the FSB.

We are a support group that has organized to provide material, moral and political support to our arrested comrades. We suggest that you participate in the Week of Solidarity from January 2 to 9 to spread information about this case, to raise funds to pay for lawyers, and to show solidarity with Kirill, Deniz, Yuri, Danil, Nikita and Roman, so that they know they are not alone.

What you can do:
* organize street events and protests;
* arrange a letter-writing evening;
* organize a concert to raise money and share information about what's going on;
* support us financially (details below);
* take any other action in solidarity with arrested comrades

Please send us information about your solidarity actions to: tumenskoedelo@riseup.net

Details on how to support us financially:

Link to the collection:
https://www.tinkoff.ru/cf/4tv7XPeQQLP

Solidarity is our weapon!