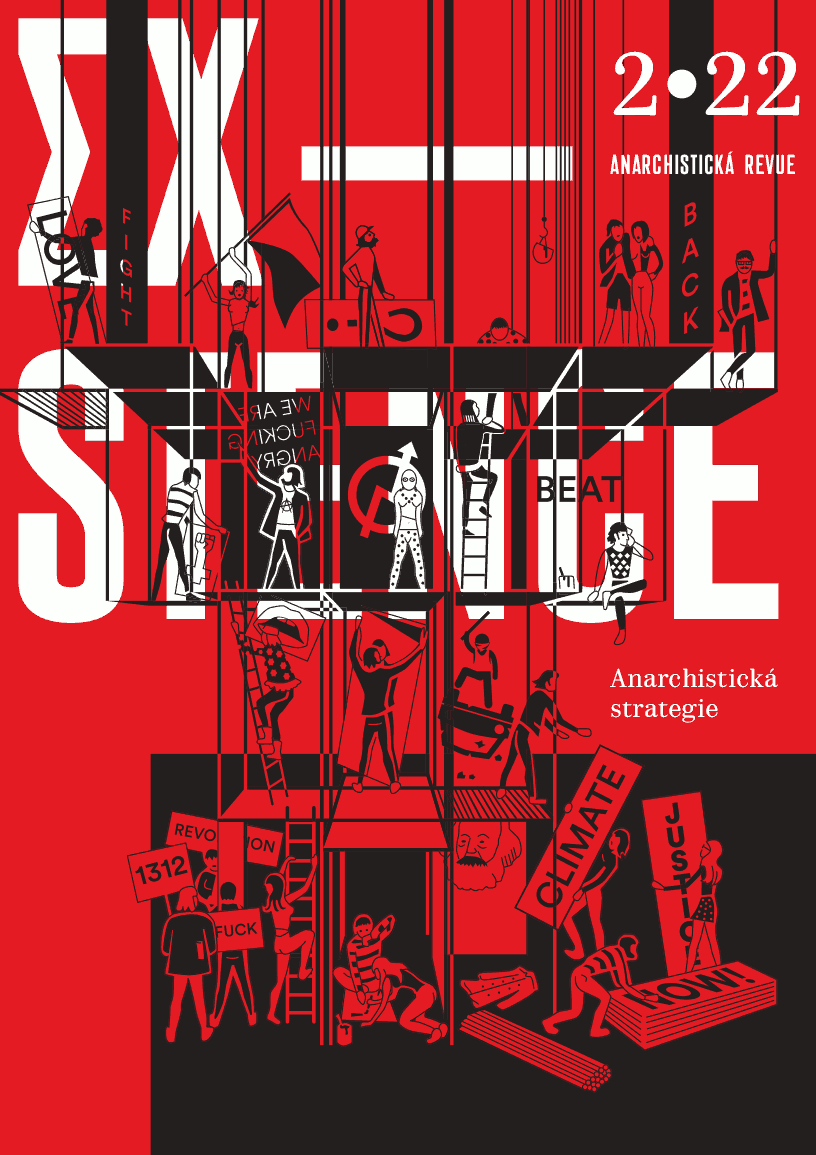 For the autumn issue of the anarchist revue Existence, we have chosen "anarchist strategy" as the main theme. Even in the past, we had considered it important for us to focus on the question of the formation of anarchist politics, attitudes towards specific issues, and corresponding ways of work. However, with the beginning of Russia's invasion of Ukraine, this topic, in its particular way, has become even more urgent, for we are discovering how misleading and unhealthy the uncritical application of 100-year-old ideological precepts can be. Instead, we see it as strategic to focus on asking pertinent questions that are relevant to the given time and place. The very formulation of these questions, and the subsequent effort to answer them honestly, helps us to shape our own path which we believe is the right one to follow. Nevertheless, we know that some questions need to be reformulated as the journey progresses, and some answers re-evaluated. Anarchism is our compass. Anarchism, therefore, is understood as a dynamic school of thought, not as a rigid and once-and-for-all fixed ideology.

In the main theme of this issue, we revisit, among other things, the turn-of-the-millennium debate sparked by the article "Ditch activism", and thus the questions regarding how we perceive ourselves, what activism means to us, what its potential pitfalls are, and what a revolutionary organization can do in non-revolutionary times. We put great emphasis on the analysis of individual issues, the social situation, and the condition of the anarchist movement, to choose our next steps based on this analysis. To be more specific, we present an update of an earlier text by the AF (anarchist federation), which deals with the segmentation of anarchist goals to embark on the search for anarchist politics of our own. That this politics should not be an act of self-sacrifice or a boring routine is the subject of the text "Your politics are boring as fuck" translated from the CrimethInc website. As an example of thinking about the ways of anarchist political work elsewhere, specifically in the Russian environment, we publish the article "Strategy of Activism And Street Action" by Annti Rauntianien, a Finnish anarchist who worked in Russia for many years.  Strategic thinking is also introduced by an excerpt from Peter Gelderloos' new book The Solutions are already Here: Tactics for Ecological Revolution from Below. It shows how the global resistance movement has developed effective methods for responding to overlapping ecological and political crises over the past decade and has claimed many victories.

In several texts, we return to the main theme of the previous issue of Existence which was entitled "In Defiance of Invasion" and was devoted to anarchist responses to Z-fascism's murderous occupation efforts in Ukraine. At the time we pointed out the historical dispute within the anarchist movement over the approach to the First World War. Wayne Price, in his text „Malatesta on War and National Self-Determination“, a translation of which appears in this issue, shows another way of reading the anarchist thinker Malatesta in relation to the war in Ukraine. The reasons why some anarchists refuse to support resistance to the Russian invasion are discussed by Antti Rautiainen in his text "Misconceptions about Imperialism", in which he also discusses anarchist historical traumas that then lead to false conclusions. The ABC-Belarus group argues why resistance to Putin is a revolutionary necessity, and the transcript of an AF talk debunks the myths about the war in Ukraine that are being peddled on the left and within the anarchist movement itself. An AF member then disputes the Italian Anarchist Federation's text „For a New Anarchist Manifesto Against the War“, picking up on the AF's criticism of a statement issued in March by the International of Anarchist Federations, of which the AF is a member.

Also in the issue, you will find a look back at the struggle waged nine years ago over Istanbul's Gezi Park. We could not leave out this year's uprising in Sri Lanka, which is viewed from an anti-authoritarian perspective in an interview with a local anarchist. Anarchist Laura Akai's memories will take us to the United States of the 1970s and 1980s. The life story of French anarchist thinker E. Armand (1872 - 1962), and the obituary of Ricardo Flores Magón (1874 - 1922), who died 100 years ago, by William C. Owen will take us even further back in time.

And as always, we bring you our regular columns. The overview of some of the activities of the Czech anti-authoritarian movement, with which our magazine traditionally begins, is dominated by longer reports from the anarchist May Day on Střelecký ostrov and the ninth annual Prague Anarchist Bookfair. The Anarchist Federation section informs about a new comic book from our publishing house, about cheerful Prague barbecues and the passing of Václav Tomek. A review of texts from recent issues of the AF wall bulletins tackles the themes of clero-fascism, racism, inflation, the hypocrisy of NATO, and the need to expropriate the oligarchs. Last but not least, as always, a few reviews. The author of the book on Louise Land-Stich (1885-1969) probably won't be very happy about the longest one of them. We also look at the titles Are Prisons Outdated?, We Fall on Your Head Too, The Women Who Wouldn't Keep Silent, We Told You So, Anarchy Here and Now, Mutual Aid, Chronicle of a Hunger Strike, Hell Under the Spanish Sky, Believing in Beasts and Piccolo. As a bonus, we bring you a review of a video series on anti-fascist art.

We wish you a stimulating reading!